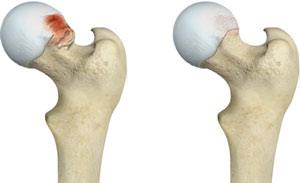 The hip joint is a ball and socket joint, in which the upper rounded end (head) of the femur (thigh bone) articulates with the cavity of the acetabulum in the pelvic bone. The cartilage surface of the femoral head and acetabulum allows smooth movement of the hip joint. Occasionally, the femoral head and/or acetabulum may have an irregular shape due to acquired overuse, or inherent genetic or developmental abnormalities, and is called femoroacetabular impingement (FAI). This can cause damage to the cartilage and tissues that border the articulating surfaces, resulting in pain and limitation of movement. FAI associated with a bump or prominence on the femoral head/neck junction is called Cam impingement. A femoroplasty is a surgical procedure to correct Cam impingement and is indicated when conservative treatments fail to relieve pain.

Femoroplasty is usually performed by a minimally invasive technique called arthroscopy, in which a camera and miniature instruments are inserted into small incisions to reach the hip joint. Bony irregularities on the femoral head and neck are removed and a more anatomic contour is sculpted with a small bone burr. Tissue damage such as labral tearing is typically addressed during the procedure.

After femoroplasty, you may go home the same. You will be advised to use crutches for a period of 4 weeks with 50% weight bearing. Physical therapy is usually recommended immediately following surgery to improve movement and strength, usually within 48-72 hours.

Since the procedure is performed arthroscopically complications are rare but may include nerve injury, femoral neck fracture and heterotopic ossification (bone deposition in soft tissue).

Young Athlete with inability to run for 8-9 months 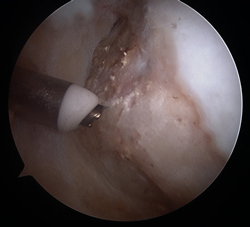 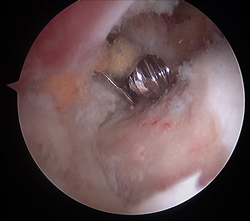