What is Femoroacetabular Impingement?

Femoroacetabular Impingement (FAI) refers to a process by which a misshapen hip joint experiences abnormal impingement throughout normal range of motion, gradually leading to breakdown of the labrum and cartilage in the joint. This breakdown of labrum and cartilage tissue causes pain and dysfunction, and left unaddressed may eventually lead to premature osteoarthritis. This process typically unfolds over months to years. From a bony standpoint, the hip joint is comprised of the femur and the acetabulum, the name for the socket portion of the pelvis bone. The femoral head articulates with the acetabulum. In FAI, the femoral head/neck and acetabular socket abut or impinge on each other in an abnormal manner, and abut within an arc of motion when they should not touch.

What are the different types of FAI?

FAI may be broadly divided into 2 main categories: Cam impingement and Pincer Impingement. 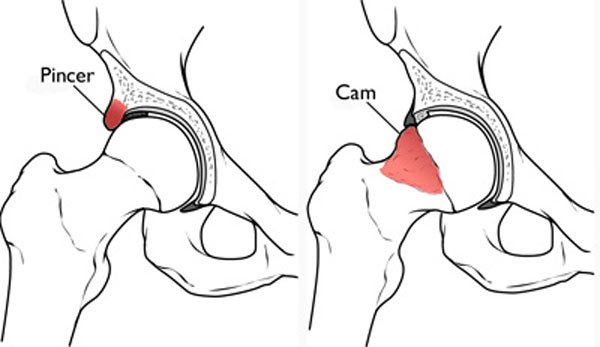 Cam Impingement refers to an osseous bump on the femoral neck that distorts the normal round, globe-like shape of the femoral head. The femoral head and neck normally taken on an hourglass curvature in which the circumference of the head tapers to the neck. In Cam impingement, there is a loss of head-neck offset (the neck is as wide or prominent as the head), limiting the amount of hip flexion that can be achieved before the femoral neck abuts the acetabular socket.

Pincer Impingement refers to an excessively deep acetabular socket, restraining normal hip range of motion. Pincer impingement in turn may be divided general into two types: global and focal. Acetabuli profunda and acetabula protrusion terms describing moderate and and severe forms of globally deep sockets, respectively. These patients have global, rather than focal, overcoverage of the socket, and are seldom a good candidate for hip arthroscopy unless there is only a focal area of their overcoverage responsible for problems. Young patients with these problems are occasionally candidates for pelvic osteotomy procedures, in which cuts are made in the pelvis bone to shift the position of the socket.

Focal overcoverage is the more common form of pincer impingement. This may generally be cause by either a focal prominence or bump on the anterolateral acetabulum most commonly, or due to retroversion of the acetabulum, which is malalignment of the socket tilting further backward than normal. This typically occurs in the 12 oclock to 3 oclock range of the socket. Focal pincer impingement is more amenable to surgical correction with hip arthroscopy.

The cause of FAI is poorly understood. The best estimation of the etiology is genetic, meaning that it develops as a person grows into his/her adult skeleton, and was predetermined from their genetic makeup. It is known from research that FAI is more common among family members. Additionally, it is believed FAI may become exacerbated or worsened by certain types of repetitive activities, particularly high-flexion activity like sprinting or other running sports, deep squats and lunges, gymnastics, dance, and other activities. It is known, for example, that elite football players have a higher prevalence of CAM-type FAI. Repetitive stress injuries may cause reactive bone formation, the body’s attempt to reinforce the bone in response to stress, and grow a larger bump on the femoral neck or create a more prominent shelf on the acetabular socket. This may lead to a mild form of FAI becoming more severe over time.

How is FAI diagnosed? What tests are necessary? 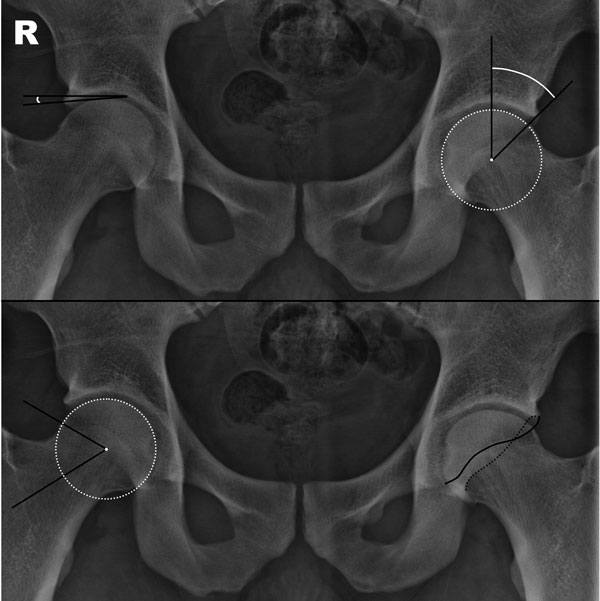 Femoroacetabular Impingement is a disorder of misshapen bones around the hip, the femur and acetabulum. For that reason, FAI may be diagnosed with proper xrays. The views typically ordered to evaluate for FAI include an AP Pelvis, Frog-leg lateral, Cross-table lateral, and False Profile views.

On an AP Pelvis view, numerous calculations are made to determine whether FAI is present. Two of the most important are center-edge angle and alpha angle:

Center-edge angle (CE angle) measures a vertical line from the center of the femoral head (measured as the center of a perfect circle) and another line connecting the center of the head to the lateral most edge of the acetabulum. The angle between these lines is the CE angle. A normal CE angle is 25-39 degrees. CE angle below 25 degrees suggests borderline, mild (<20), or moderate/severe (<15) dysplasia of the acetabulum (i.e. a socket that is too shallow). Hip arthroscopy for dysplastic hips can make patients worse by destabilizing a joint that already has inadequate bony stability due to the shallow socket. These patients are rarely a candidate for hip arthroscopy. CE angle> ) 40 indicates a pincer lesion, in which the acetabular socket is excessively deep, and restraining normal hip range of motion. If the medial edge of the acetabulum crosses the ilioischial line, the condition is called acetabuli profunda, or deep socket. If the medial edge of the acetabulum crosses the iliopectineal line, this condition is called acetabula protrusio, or a protruding deep socket, and more severe condition. These patients have global, rather than focal, overcoverage of the socket, and are seldom a good candidate for hip arthroscopy unless there is only a focal area of their overcoverage responsible for problems. 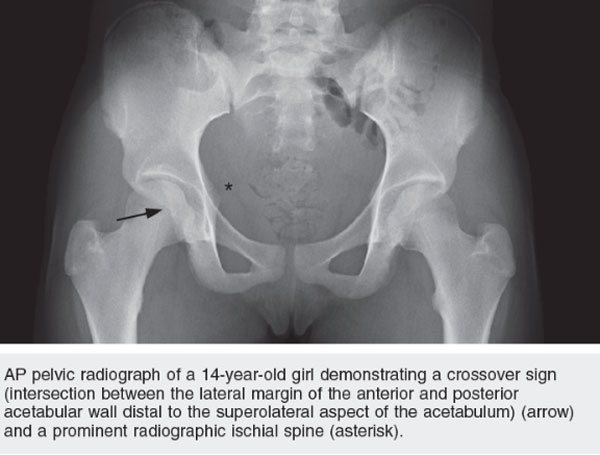 To determine focal overcoverage, xrays are evaluated for a cross-over sign, in which the anterior and posterior walls of the acetabulum criss-cross on the xray. This indicates probable acetabular retroversion and focal overcoverage of the acetabulum, typically in the anterolateral portion of the acetabulum, in what is referred to as the 12 oclock to 3 oclock range of the socket. Another important sign of acetabular retroversion is an ischial spine sign, in which the normally hidden ischial spines are visible within the pelvic basin on xray.

The lateral edge of the femoral neck on an AP Pelvis correlates with the 12 oclock position on the femoral neck clockface, in which the femoral neck is conceptualized in an axial plane to understand its three-dimensional structure. To assess for a Cam lesion at other positions of the clock face, the Frog-leg (2:00) and cross-table (3:00) views are obtained. This provides a more comprehensive assessment of the area of the femoral neck (12-3:00) where Cam lesions most commonly occur.

The acetabular false profile view provides valuable information about the joint space. Often times a hip joint will appear healthy, with normal joint space, and there is no clear evidence of degenerative disease or arthritis. Because the anterolateral portion of the joint is often the first to reveal subtle joint space narrowing (and early arthritis), this view can help identify hips with early arthritic changes that are less likely to benefit from hip arthroscopy.

Occasionally CT scan, often with 3-dimensional reconstructions, is necessary to fully appreciate and understand the shape and morphology of the deformity.

What problems are associated with FAI? 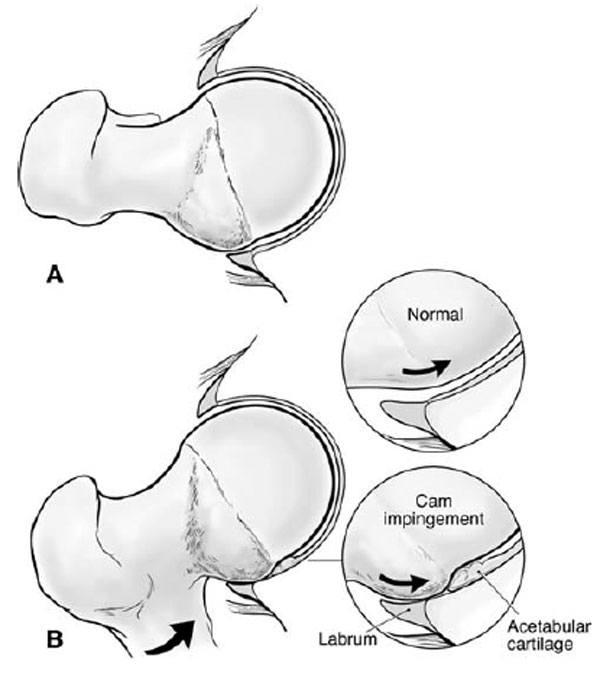 The problem with FAI is that it causes abnormal and premature damage to the cartilage and labrum of the hip joint, and may cause labral tears or hip arthritis in time. The labrum is ring of fibrocartilage that surrounds the acetabulum and functions to deepen the socket, maintain the fluid suction seal to the head, and reduce contact pressures of the articulating surfaces.

What is the next step? 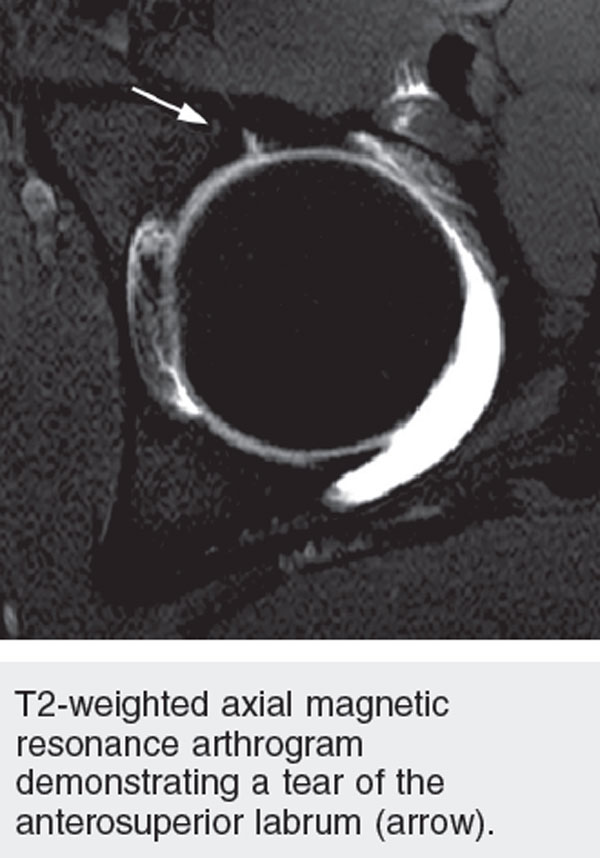 If a patient has FAI and pain the in the hip, with concern for labral tear based on exam, an MRI arthrogram may be indicated to confirm the diagnosis and evaluate the soft tissue structures that can not be visualized with xray An arthrogram involves injected dye into the joint to assist in detecting the tear. This increases the sensitivity of the test for detecting the tear.

How is this treated?

If a patient fails nonsurgical treatment, and is an appropriate surgical candidate, then hip arthroscopy may be the next step. This involves small portal incisions in the skin and specialized instruments to evaluate the joint with a camera. Using specialized tools a labral tear can be identified and repaired with anchors and sutures. The anchors are non-metallic, and do not show on xray. The misshapen bone (FAI) is also corrected by shaving down the bumps with a small bone bur. Xray is utilized during the procedure to provide real-time feedback during the sculpting process. 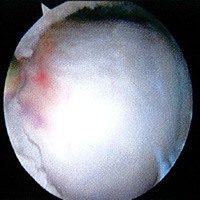 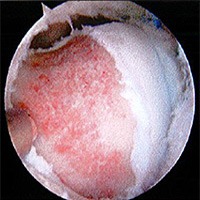 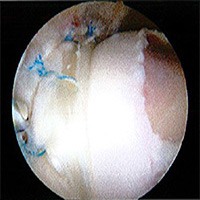 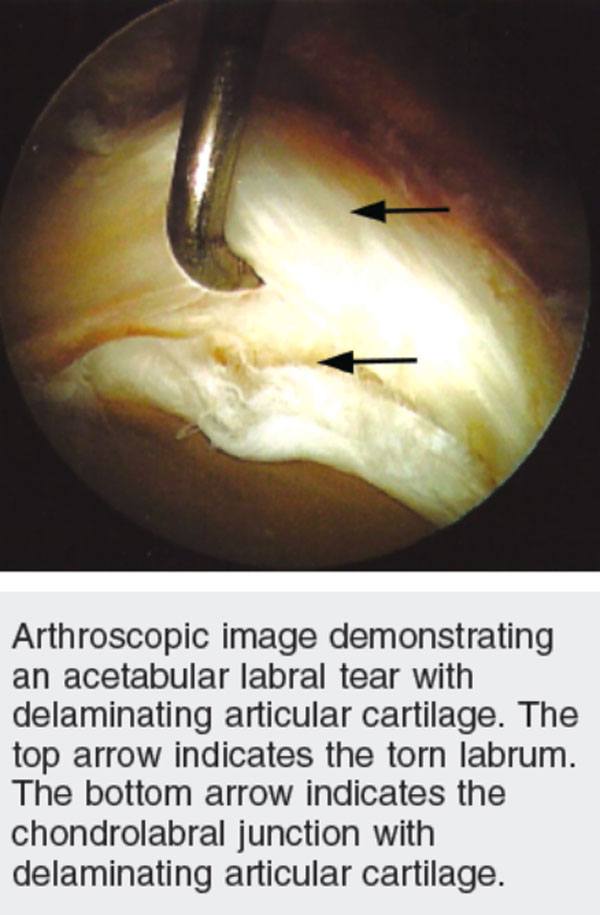 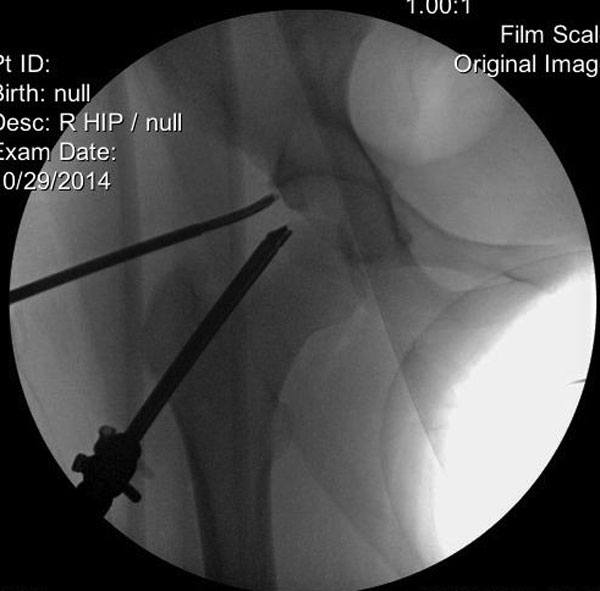