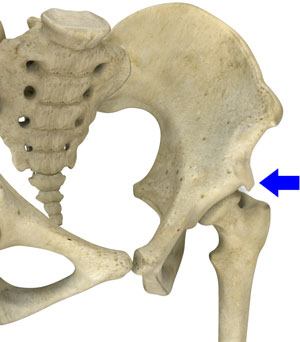 The subspine or anterior inferior iliac spine (AIIS) is a bony process located on the wing of the ilium (upper, large, flat and cup-shaped bone of the hip bone). It lies deep under the soft tissues where the ilium slopes towards the hip joint. The subspine is divided into three types:

The shape of the AIIS correlates with the range of motion of the hip and any bony outgrowth can cause the bones to painfully rub against each other (impingement). Hip impingements were generally thought to be a cause of abnormal growths in the bones that make up the ball and socket joint of the hip, namely the femur (thigh bone) and the acetabulum (socket of the hip bone). It is now seen that even bone structures apart from the joint can lead to impingement. Subspine impingement as seen with type II and type III shapes of the subspine is a critical condition that causes the decrease in internal rotation and hip flexion (upward /lifting of the knee), thereby requiring correction.

Subspine impingement is caused when the prominent region of the subspine impinges on the neck of the thigh bone (femur) during hip flexion.

Subspine impingement can further lead to the following complications:

Your doctor will discuss the symptoms and conduct a physical examination of your hip. An impingement test will be conducted by moving your knee towards your chest and rotating it towards your opposite shoulder. Impingement is confirmed if you experience hip pain.

Treatment options depend on the extent of impingement and the occurrence of deformity. Subspine impingement is treated with an arthroscopic decompression technique (minimal invasive surgery using a small camera and a lighted device) or as an open decompression. If an avulsion fracture is involved, where a part of the bone from the subspine gets detached along with a muscle and tendon tear, it is surgically excised during an open surgery.