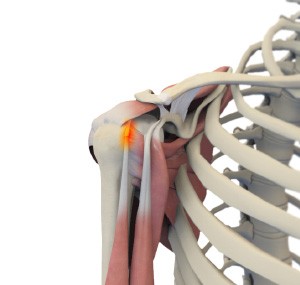 The biceps is a large skeletal muscle of the upper arm that flexes the elbow to lift the forearm, and is also responsible for some shoulder movements. It is connected by tendons to bones in the shoulder and elbow on either side. Injury of the biceps tendon in the region of the shoulder can occur due to disease, overuse or repetitive overhead activity, leading to pain and weakness in front of the shoulder and down the upper arm. This may be treated conservatively, but in severe cases a surgical procedure called biceps tenodesis may be performed to repair the biceps and alleviate symptoms. A biceps tenodesis is recommended to treat biceps tendon tears, inflammation or instability accompanied by injury to the rotator cuff muscles that surround and support the shoulder joint.

The procedure is usually performed by a minimally invasive technique called arthroscopy, in which a viewing tube and miniature instruments are inserted through small incisions to reach the operative site and correct the deformity. You will lie on your side or on your back in a beach chair position for the surgery. A suture is introduced through a needle into the biceps tendon, which is then cut from its damaged insertion into the shoulder. The suture prevents the detached tendon from pulling into the arm. An incision is created in the front of your shoulder, through which the cut tendon is pulled out and trimmed. A deep tunnel is then created in the upper part of the humerus. The repaired tendon is then inserted into the tunnel in the humerus and fixed with a special screw.

Following the procedure, your arm is placed in a shoulder sling for 3 weeks. You may remove the sling while performing certain light activities such as dressing or bathing. A physiotherapy program is recommended to improve movement and strength of your shoulder. Complete recovery may take from 3 weeks to a few months.

As with any procedure, biceps tenodesis may be accompanied by certain complications such as infection, bleeding, failure of attachment and stiffness.