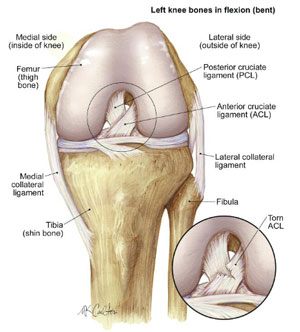 One of the most common knee injuries is an anterior cruciate ligament sprain or tear, with an incidence in the United States approaching 200,000 annually. Nearly 150,000 ACL reconstruction surgeries are performed annually in the U.S.

Athletes who participate in high demand cutting sports like soccer, football, and basketball are more likely to injure their anterior cruciate ligaments.

If you have injured your anterior cruciate ligament, you may require surgery to regain full function and stability of your knee. This will depend on several factors, such as the severity of your injury and your activity level. The TriHealth Orthopedic and Sports Institute comprises a comprehensive team of sports medicine orthopedic surgeons, non-surgical physicians, physical therapists, and athletic trainers to diagnose, treat, and prevent ACL injuries. 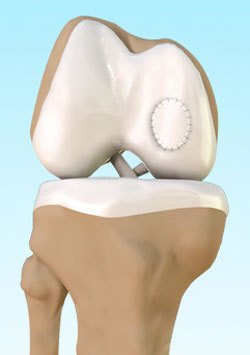 The classic ACL injury occurs during a non-contact event usually when decelerating, stopping suddenly, twisting, cutting, or jumping. Oftentimes the patient will hear or feel a “pop” at the time of injury and sometimes they may report brief a hyperextension of the knee joint. Immediately after the injury patients may be able to continue activity, however most of the time the patient is unable to continue regular activity and a few hours after injury the knee swells considerably. There is typically tenderness around the joint, loss of full range of motion, and discomfort applying weight to the leg.

When the ACL is injured as a result of direct contact, football is often the associated sport. Most often, the knee is subjected to a direct blow to the lateral side and other ligaments are injured in addition to the ACL. The most common multi-ligament injury is the ‘unhappy triad’ that includes the ACL, medial collateral ligament (MCL), and the medial meniscus.

Several studies have shown that female athletes have a higher incidence of ACL injury than male athletes in certain sports. It has been proposed that this is due to differences in neuromuscular control. Other suggested causes include differences in pelvis and lower extremity (leg) alignment, increased looseness in ligaments, and the effects of estrogen and relaxin on ligament properties.

Three bones meet to form your knee joint: your thighbone (femur), shinbone (tibia), and kneecap (patella). Your kneecap sits in front of the joint to provide protection and increase the mechanical efficiency of the extensor mechanism. Bones are connected to other bones by ligaments. There are four primary ligaments in your knee: the ACL, Posterior Cruciate Ligament (PCL), Medial Collateral Ligament (MCL), and Lateral Collateral Ligament (LCL). They act like strong ropes to hold the bones together and keep your knee stable.

About half of all injuries to the anterior cruciate ligament occur along with damage to other structures in the knee, such as articular cartilage, meniscus, or other ligaments. A “bruise” to the bone and cartilage of the femur and tibia occur nearly 100% of the time in acute ACL tears.

Injured ligaments are considered "sprains" and are graded on a severity scale.

Partial tears of the anterior cruciate ligament are rare; most ACL injuries are complete or near complete tears (Grade 3).

During your first visit it is important to discuss your overall medical health, activity levels, hobbies and sports participation, and goals for the future, both professionally and in recreation. This will help determine the best treatment for your needs.

Imaging tests are used to confirm the clinical diagnosis of an ACL tear:

Treatment for an ACL tear will vary depending upon the patient's individual needs. For example, the young athlete involved in agility sports will most likely require surgery to safely return to sports. The less active, usually older, individual may be able to return to a quieter lifestyle without surgery using physical therapy rehab.

A torn ACL will not heal without surgery. But nonsurgical treatment may be effective for patients who are elderly or have a very low activity level. If the overall stability of the knee is intact, then simple, nonsurgical options may allow a return to activity sooner.

After acute injury, initial steps should be taken to reduce swelling by applying the established RICE principles (Rest, Ice, Compression, and Elevation). Early efforts should be made to regain full ROM, especially extension, and walking with full weight bearing is encouraged 7-10 days after injury. Usually within 1-3 weeks acute swelling has reduced and full ROM is established.

Once full ROM is established, an aggressive rehabilitation program focusing on strengthening and endurance should be followed. The goal of these exercises is to change the quadriceps/hamstring strength ratio from a normal 3:2 ratio to a 1:1 ratio because the hamstring muscles help the ACL prevent forward translation of the tibia on the femur.

When strength is approximately 70% of normal, the rehabilitation program will incorporate a proprioceptive / balancing component using balance boards and other dynamic tools. The goal of this training is to increase stability in the knee joint replicating sport activities.

The last step of the rehabilitation program should assess which activities create pain, discomfort, or instability in the knee joint and actively modify the intensity, duration, or technique of these activities to avoid pain.

Patients should regain full ROM, reduce swelling, and have quadriceps control prior to surgery. Occasionally patients are involved in a preoperative therapy program and attainment of full ROM can take 2 weeks or longer. It has been speculated that full ROM prior to surgery can decrease postoperative rehabilitation time, and improve postoperative range of motion.

Surgery for ACL injury is an ACL reconstruction using a tendon graft and is typically performed using arthroscopic methods. The surgeon makes small incisions so that a pencil shaped instrument with a camera and lighting system attached can penetrate inside the knee joint and see the inside structures. The inside of the knee can be seen on a TV screen and the surgeon will perform surgery through several small incision points around the knee.

It is important to discuss graft options with your surgeon to select the right graft for you. Some orthopedic research indicates lower re-tear rates with patellar tendon, but a majority of the highest quality research indicates no significant difference among the three graft options, with successful outcomes obtained with all graft choices.

In addition to harvest site, another difference in grafts it consider is autograft versus allograft. Allografts are harvested from cadaver donors while autografts are harvested from the patient undergoing ACL reconstruction. Each graft has advantages and disadvantages. Most orthopedic research has demonstrated lower re-tear rates using autograft tissue, and this is generally recommended in young competitive athletes under age 25. However, autograft requires additional incisions and may result in more early postoperative pain. Patients may perceive slower progress decreasing pain and restoring range of motion in the early rehab phase, although autograft completes the ligamentization process more rapidly than allograft tissue. Patients choosing allograft may benefit from less pain immediately after surgery, and may feel better sooner, but the incorporation of the graft into a new ACL may take longer than autograft, and long-term re-tear rates are higher in allograft tissue. Additionally, although increasingly rare given modern testing and sterilization techniques, disease transmission of hepatitis and HIV remains possible, generally considered a 1: 1.6 million risk.

ACL reconstruction surgery has a 90% success rate in terms of knee stability, patient satisfaction, and return to full activity, which comprise the primary goals of surgery. ACL reconstruction should also theoretically protect the menisci from further injury and slow degenerative changes in the knee joint, although orthopedic research proving this effect is still lacking.

The re-rupture rate of a reconstructed ACL is very low, generally 2-5% at an average of 2 years after surgery. Of equal or greater concern is the risk of subsequent ACL injury on the opposite leg, which increases substantially from 1 in 3,000 to 1 in 50.

Patients who opt out of ACL reconstructive surgery may experience further injury to the knee joint, particularly to the menisci. ACL-deficient patents are at higher risk for later meniscectomy, 20% over the 5 years following ACL injury. Also, 70% of ACL deficient patients have signs of osteoarthritis in the knee.

Incidence : ACL injuries in patients younger than 14 years vary from 3% to 10%. However, sports are becoming increasingly more competitive at younger ages, thus ACL injury incidence is expected to increase among the younger population.

Special considerations must be made when deciding whether or not to move forth ACL reconstructive surgery in children. There is possibility of interrupting and/or arresting normal bone growth that can result in significant leg length differences or angular deformity. Physeal-sparing (avoiding growth plate trauma) ACL reconstruction can be performed for younger patients, and improvements and technology and surgical technique have opened this option to many patients previously ineligible for surgery. Nonetheless there remain concerns these surgeries sacrifice accurate restoration of the ACL anatomy for the sake of protecting the growth plates.

While ACL reconstructions have allowed patients to return to high level sports and prevent meniscus tears, the surgery still has room for improvement. Recent studies of patients that had ACL reconstructions 10 years prior still develop early osteoarthritis. There has been a lot of interest in ACL augmentation and double bundle ACL reconstruction. These are surgical techniques that are aimed to preserve or replace the normal ACL in a more anatomic fashion.

With ACL augmentation surgery, the goal is to preserve as much of the original ACL as possible while providing additional support via synthetic high-strength suture material. When the ACL is torn, the two bundles in the ACL may have varying degree of injuries. The attempt is to preserve the patient’s ACL so that it can heal together with the support of suture material, and by definition maintain the original anatomy of the ligament. Concerns with this technique include the poor healing potential of the ACL, although more recent studies suggest it may have better healing capacity than previously believed. Nonetheless this is considered an experimental procedure at this time and may hold promise in the future.

Regardless of surgical or nonsurgical treatment, rehabilitation plays a vital role in getting you back to your daily activities. A physical therapy program will help you regain knee strength and motion. If you have surgery, physical therapy first focuses on returning motion to the joint and surrounding muscles. This is followed by a strengthening phase designed to protect and support the new ligament. The final phase of rehabilitation focuses on a functional return tailored for the athlete's sport. At TriHealth Orthopedic and Sports Institute, athletes have the opportunity to participate in BOOST, a comprehensive return-to-sport program following the conclusion of postoperative physical therapy. This typically occurs 3-4 months after surgery. To learn more about BOOST and its role in returning athletes to peak performance after ACL surgery, please visit: BOOST Functional Sport Training

[Note: You will need Acrobat Reader to view the forms listed on this page. If you do not have Acrobat Reader, you may download it here]